West Japan’s largest seaside outlet is teaming up with Gundam to promote Mobile Suit Gundam Hathaway’s Flash. From April 29, 2021 to June 30, 2021 Rinku Premium Outlets, located in Izumisano-Shi, Osaka, will host a photo spot for the upcoming Gundam feature among other promotions.

Located at the “Seaside Area” facing Osaka Bay at the Rinku Premium Outlets, a resort atmosphere surrounded by sea and greenery reminiscent of the setting in the film, will be the first Hathaway’s Flash photo spot in Kansai. A 2.6-meter tall Xi Gundam with protagonist Hathaway Noa and leading lady Gigi Andalucia are lined up in the photo spot with Osaka Bay in the background, where visitors can enjoy taking pictures evocative of the scenes at sea in the movie. Many stills from the film are used as well so visitors can enjoy the world of Hathaway’s Flash ahead of its theatrical release.

With a total purchase of 10,000 yen or more (including tax, on the day of purchase only) customers can give the keyword “Senko no Hathaway” to the Information Center to be entered into a lottery in which 100 people will be selected to receive Hathaway’s Flash advance tickets, and 20 people will receive Hathaway’s Flash original face shields. The lottery will be held from Thursday, April 29, 2021 to Thursday, May 6, 2021.

Next Tamashii Nations Announces Next Wave of Gundam Universe Figures 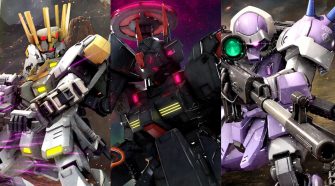