Next Gundam: The Witch from Mercury Releases Beguir-Beu Smartphone Wallpapers 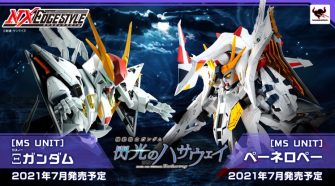