Announced last month on September 30, Sunrise Music Label, the music publishing subsidiary of the anime production studio, will be releasing Mobile Suit Gundam Hathaway’s Flash vinyl records of the soundtrack and an accompanying themed record player. Sunrise has now released the jacket artwork and packaging design for the records and their player.

The Mobile Suit Gundam Hathaway’s Flash Original Soundtrack Analog Version is a three-disc set that is priced at 7,700 yen. The records will include all eighteen pieces from the Hathaway’s Flash soundtrack by composer Hiroyuki Sawano, along with Sawano’s commentary.

The Mobile Suit Gundam Hathaway’s Flash Portable Analog Player (Vinyl Motion) is priced
at 25,300 yen.
The records and player are said be limited in quantity and will begin pre-orders Friday, October 1, 2021 through Sunday, October 31, 2021. They are scheduled to ship late December 2021.

A “listening video” by Hiroyuki Sawano and Sunrise’s Gundam producer Naohiro Ogata was released. The video contains valuable information such as their impressions after listening to the analog version and stories behind the music production of Hathaway’s Flash.

Since its release on June 11, Mobile Suit Gundam Hathaway’s Flash has attracted 1.08 million viewers and grossed 2.2 billion yen at the box office. 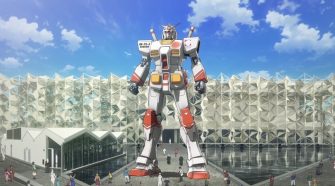