The official Twitter account for Mobile Suit Gundam: Cucuruz Doan’s Island has made more casting announcements for the upcoming film.

M’Quve (CAST: Takumi Yamazaki, reprising his role from Mobile Suit Gundam: The ORIGIN) Colonel in the Principality of Zeon army. He is a schemer and secretly issues a plan

Uragan (CAST: Makoto Yasumura). M’Quve’s second-in-command. When M’Quve pointed out to him that something was wrong at Point CA, he dispatches Southern Cross team from the Moroccan front.

Revil (CAST: Hiroshi Naka, reprising his role from Mobile Suit Gundam: The ORIGIN) General of the Earth Federation Forces. He requests that the White Base Team, now under the command of Admiral Gopp, be incorporated into the Northern Army.

Gopp (CAST: Naomi Kusumi, reprising his role from Mobile Suit Gundam: The ORIGIN) Admiral of the Earth Federation Forces. He leads the La Grandpa fleet to negotiate with Colonel M’Quve for the capture of Gibraltar. The White Base team is under his command. 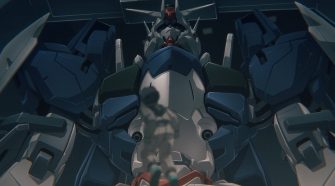