Bandai Namco Filmworks has announced the release of the volume one Blu-ray and DVD sets for Mobile Suit Gundam the Witch from Mercury.

Priced at 9,680 yen, the volume one Blu-ray set will feature the first three episodes of the TV anime, “The Witch and the Bride”, “Cursed Mobile Suit”, and “Guel’s Pride”, along with the Prologue.

Priced at 6,380 yen, the volume one DVD set will also feature the first three episodes of the TV anime, “The Witch and the Bride”, “Cursed Mobile Suit”, and “Guel’s Pride”, along with the Prologue.

The set will include the the Witch from Mercury Special Event Ticket, the aforementioned video and audio features, and disk jacket illustration by original character designer Mogumo.

The Mobile Suit Gundam the Witch from Mercury Blu-ray/DVD volume 1 will release March 24, 2023. 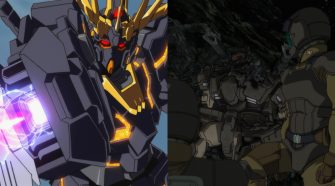