Manga creator Masakazu Iwasaki recently announced on his personal Twitter account that he would be penning a new manga titled “Arasa OL Haman-sama”, reimagining the popular Gundam antagonist as a female office worker. In the tweet he also wrote the manga would be beginning serialization in next month’s issue of Gundam Ace, the official monthly Gundam manga magazine published under Kadokawa Shoten.

The official Gundam Ace Twitter account proceeded to retweet the announcement. Presently, no further details about the series have been unveiled from Iwasaki or Gundam Ace.

Haman Karn first appeared in the 1985 Mobile Suit Zeta Gundam series as a secondary antagonist and regent of the Neo Zeon faction. She would be promoted to main antagonist in the sequel series Mobile Suit Gundam ZZ the following year. Haman has since become a popular and enduring figure in the Gundam franchise and among fans, characterized by her cold, ruthless nature and troubled relationship with Char Aznable. Details of her origin and this relationship would be expounded in the 2001-2009 manga Mobile Suit Gundam: Char’s Deleted Affair [C.D.A] ~ Portrait of a Young Comet by Hiroyuki Kitazume. 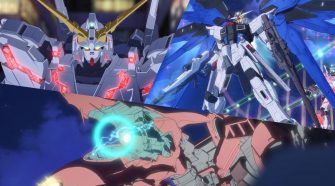