Bandai Lifestyle bath-products brand Bikkuri? Tamago is collaborating with the Gunpla series to release two new sets to their “Dramatic Bath Series” to commemorate the 20th anniversary of the brand. Bikkuri? Tamago launched in 2002 as a new line of bath additives which featured a toy inside once the bath capsule had dissolved in the water.

The new bath sets are themed after the Mobile Suit Gundam SEED series. Both priced at 1,540 yen and releasing in July 2022, one set includes the Entry Grade 1/144 Strike Gundam (Deactive Mode) and either Mobile GOOnH (Sand Yellow) or Mobile ZnO (Light Gray) mini Gundam models, while the Entry Grade 1/144 Strike Gundam (Grand Slam Equipped Type) includes either the Mobile GOOnH (Brown) or Mobile ZnO (Green) mini Gundam models. The two colors of the mini gunpla can be combined to recreate the accurate colors seen in the SEED series. The mini model kits will appear in a capsule once the bath bomb has dissolved. 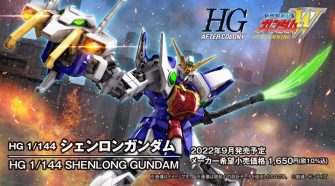