Director Yoshiyuki Tomino has been awarded the 71st Kanagawa Culture Award for his great impact on the animation industry in Japan and abroad, having directed numerous anime productions, including the Gundam franchise.

Established in 1952, the Kanagawa Culture Award is a joint project between Kanagawa Prefecture and Kanagawa Shimbun. Each year, the prize is awarded to an individual or organization that has made outstanding contributions to the improvement and development of Kanagawa Prefecture’s art and culture.

Born in Odawara, Kanagawa Prefecture, Yoshiyuki Tomino is one of the pioneering creatives in the anime industry having debuted on Osamu Tezuka’s Astro Boy in 1963 as a writer and storyboard artist. Tomino began his long standing relationship with legendary anime studio Sunrise with directing works such as the 1975 La Seine no Hoshi and their “super robot” mecha anime Brave Raideen, Invincible Super Man Zambot 3, and Invincible Steel Man Daitarn 3.

The director would go on to pair with the studio again to create the 1979 Mobile Suit Gundam series, ushering in a new sub genre of mecha anime works. Gundam moved away from simple “good vs evil” storylines and depicting mecha as “superheroes” but as realistic war machines with grounded, nuanced political narratives, to be later dubbed the “Real Robot” genre. Tomino has since become a star player in the genre directing a multitude of mecha anime and Gundam entries with Sunrise such as:

Released in 2014, Gundam Reconguista in G celebrated the 35th anniversary of the Gundam franchise and saw the return of Yoshiyuki Tomino to the Gundam franchise. Announced in November 2018 as a part of the Mobile Suit Gundam 40th Anniversary Project, the director retold the series in the form of five compilation films, releasing from 2019 to 2022.  The compilations were to include new scenes and newly recorded, updated dialogue. 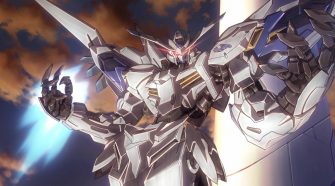