With the digital launch of YOASOBI’s Mobile Suit Gundam the Witch from Mercury opening theme song “The Blessing”, the duo has posted still images of the tune’s corresponding music video, featuring protagonist Suletta Mercury and the XVX-016 Gundam Aerial. The music video will be released tomorrow October 2, at 20:00 JST on the band’s official YouTube channel.

Early September it was announced YOASOBI would be performing the opening theme song for the Mobile Suit Gundam the Witch from Mercury TV anime, titled “Shukufuku” or “The Blessing”. The song is accompanied by an original novel named “Cradle Star”, authored by the series head writer Ichiro Ohkouchi.
A limited edition CD of “The Blessing” will be released on November 9. Priced at 4,400 yen, it will include an original YOASOBI-themed Demi Trainer Gundam model kit, YOASOBI-themed marking stickers for the HG Gundam Aerial, and the entire “Cradle Star” companion novel. 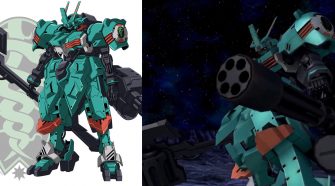