Mobile Suit Gundam Hathaway’s Flash was announced in November 2018 as a film trilogy to celebrate the Gundam 40th anniversary, adapting the Yoshiyuki Tomino-penned novel series of the same name. The novels were originally released from 1989 to 1990, as a follow-up to Tomino’s Mobile Suit Gundam Char’s Counterattack: Beltorchika’s Children novel, published by Kadokawa’s Kadokawa Sneaker Bunko imprint.

“Long considered impossible to adapt.” was included in the narration of one of the first teaser trailers for the upcoming feature, highlighting its elusive nature from animation production. Prior, the novel series would only receive attention in the form of video games such as the SD Gundam G Generation series and a small assortment of figures and model kits. Multiple reasons have been cited for Sunrise’s apparent apprehension from adapting the notorious novel, from the complexity of its mobile suit designs to simply the “timing was off”.

The first film very closely adapts the first volume in Tomino’s novel series nearly shot-for-shot, with direct dialogue pulled from the pages. But its not without revisions, some scenes from the book are briskly covered, and others have been added to enhance characterization, drama and stylistic purposes.

One of the treats of Hathaway is how it feels authentically like a Shukou Murase anime. No stranger to dim visuals, intense drama and emotion with such works as Genocidal Organ and Ergo Proxy, Hathaway has the pleasure of being bathed in the dark atmosphere akin to Murase, while also honoring the tone of the original novel. Murase opted for a cinematic, “Hollywood”-like direction for Hathaway, composer Hiroyuki Sawano followed suit with its epic music score. Having collaborated previously on Ergo Proxy with Murase, character designer and chief animation director Naoyuki Onda provided fluid animation for the film.

In previous interviews and panels, featured in the April 2021 issue of Gundam Ace and Anime Japan Production Works 2021, cinematographer Kentaro Waki and Assistant Line Producer Narumi Iwashita spoke of Murase’s “strict demands” and “difficulties” working toward his particular visual style. Another topic of the film production is its use of 3DCG. Not only to aid in animating its complex mobile suits, but for dynamic camera movement as well.

As Davao is the main setting for this first entry, the staff of the film traveled to Davao City, Philippines for location scouting. This produced splendid scenic shots of the city, local culture and geography, making Davao truly feel lived in and almost like a character itself.

The main appeal of Hathaway’s Flash is that it’s a character study on Hathaway’s anguish over his experiences during Char’s Rebellion and ideals in his pursuit to dismantle a corrupt system, along with the complex love triangle between Hathaway, Gigi, and Kenneth. Lead Kensho Ono gives a haunting performance as Hathaway, leaning into the duality between his innocent “Hathaway” side and darker “Mafty” side. His inner turmoil and doubts are expressed throughout the film, especially as his ideals are challenged, but he is past the point of no return.

Reina Ueda brilliantly portrays the alluring yet perceptive and mysterious Gigi Andalucia, stealing nearly every scene she’s in. Her standout moment was during the Davao air raid, Ueda delivers a convincing, captivating performance of Gigi’s terror during the event.

Hathaway’s Flash canonically is more of a character piece featuring fewer mecha action scenes. However, the two presented in the film more than satisfy that Gundam staple element.

The jaw-dropping Mafty air-raid in Davao displays the carnage of an urban mecha battle. Veiled in the dark of night, only lit by fire and their beam weaponry, the clash between Mafty’s Messers and the Federation’s Gustav Karls was pulse-pounding with equal amounts of awe and terror. You could feel the fear from the fleeing civilians caught in the cross fire.

The staff were able to resolve the difficulties animating RX-105 Xi Gundam and RX-104FF Penelope by utilizing a blend of hand drawn animation with 3DCG. Part of the decision to use 3D techniques were to better express how Xi Gundam and Penelope are able to move freely under gravity due to Minovsky flight, creating an unique sense of floating. 3DCG also aided in capturing subtle movements and changes in perspective that are challenging with hand drawn animation. This produced a sublime standoff between Mafty’s Xi Gundam and Lane’s Penelope in the final act of the film, accurately exhibiting the monstrous Gundams.

Hathaway’s Flash is unique within the Gundam franchise. Despite being written thirty-two years ago, it’s a grounded, timely story. Instead of a conventional war between major powers or space based stories, its earthly depictions of environmental and immigration issues, along with terrorism continue to have an increasing relevance today.

Director Shukou Murase is at the helm of this trilogy and through his innovative and unique style, partnered with Sunrise Studio 1, they were able to produce a masterful, gorgeously animated, visually distinct Gundam feature in this first outing that truly feels like a modern Gundam anime. There is no better director to adapt this brilliant story and my favorite Gundam entry. 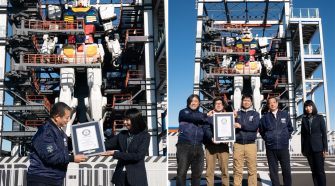