The next round of Gundam manholes in the Bandai Namco Group’s “Gundam Manhole Project” will be installed at Sagamihara in Kanagawa Prefecture.

As Japan’s national space agency JAXA has a campus based in Sagamihara, the two new Gundam manholes are themed after the JAXA’s very own ”Hayabusa” spacecraft and “SLIM” lunar lander.

The “RX-78-2 Gundam x Asteroid Explore ‘Hayabusa’” and “MS-06F Zaku II x Smart Lander for Investigating Moon ‘SLIM’” will be on display from March 29 to April 11 in the main lobby of Sagamihara City Hall. The manholes will continue their tour to the Sagamihara City Museum from April 13, to May 8, then to Midori Ward Joint Government Building entrance hall from May 10 to May 20, and lastly to Minami Ward Joint Government Building Lobby from May 24 to June 3. After their tour the Gundam manholes will finally be installed in Sagamihara mid-June.

Next RX-93ff Nu Gundam Soars through Space in New PV 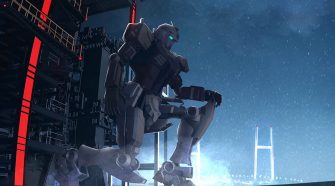