First in a trilogy of anime films helmed by Shukou Murase, Mobile Suit Gundam Hathaway’s Flash, or Hathaway is the official sequel to the 1988 Mobile Suit Gundam Char’s Counterattack movie. The film project serves as the second entry in Sunrise’s U.C. NexT 0100 Project following Mobile Suit Gundam Narrative.The project was announced in November 2018 to celebrate the Gundam 40th anniversary, adapting the Yoshiyuki Tomino-penned novel series of the same name. The novels were originally released from 1989 to 1990, as a follow-up to Tomino’s Char’s Counterattack: Beltorchika’s Children novel, published by Kadokawa’s Kadokawa Sneaker Bunko imprint.

Initially discussing the reasons why Hathaway’s Flash was “impossible” to adapt, in a follow-up article by Mantan Web, the publication elaborated more on the animation quality with Gundam series producer Naohiro Ogata, calling the film a “turning point”.

In Hathaway’s Flash, the staff were able to resolve the difficulties animating Xi Gundam and Penelope by utilizing a blend of hand drawn animation with 3DCG, creating a different style of mobile suit battles than in previous Gundam entries.

Part of the decision to use 3D techniques were to better express how Xi Gundam and Penelope are able to move freely under gravity due to Minovsky flight, creating an unique sense of floating. 3DCG also aids in capturing subtle movements and changes in perspective that are challenging with hand drawn animation.

I wanted to make Hathaway’s Flash the best it could be. That’s why Murase is the director. The visual quality of the film is beyond what Sunrise has ever done. It’s more like a live-action film, and we didn’t feel like we were making an anime from the beginning.

Director Shukou Murase has a long work history with Gundam, serving as an animator and storyboard artist on various entries such as Mobile Suit Gundam F91, Mobile Suit Victory Gundam and Mobile Suit Gundam Unicorn, as well as character designer for New Mobile Report Gundam Wing. Murase has gained acclaim outside of the mecha franchise with his direction of grim, yet masterful anime works like Genocidal Organ and Ergo Proxy, having a penchant for dark visuals and deep emotional storytelling.

The producer also had particular praise for the film’s character designer Pablo Uchida, calling him the successor to famed illustrator Noriyoshi Ohrai.

In terms of sound, “We changed the beam sounds and other elements from previous Gundam works, shifting to director Murase’s idea of sound design, and asked Koji Kasamatsu to coordinate the sound aspects” Ogata explained. The producer touted the film’s sound can only be 100% experienced in Dolby Atmos or Dolby Cinema.

Producer Ogata then teased the “future” of the Universal Century after the Hathaway’s Flash trilogy, as part of the U.C. NexT 0100 Project.

Unicorn isn’t over yet. We have to tell the story of the Republic of Zeon’s dissolution in the year 0100 of the Universal Century before we can move on. However, Harutoshi Fukui (who wrote the novel for Unicorn) is currently traveling to another universe (laughs). I’m thinking about how to adapt the era leading up to F91.

Previous Hathaway’s Flash, the Most Difficult Gundam Story to Adapt 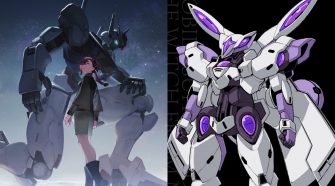