Gundam Info, the official Gundam portal website, has revealed the jacket artwork that will be used for the digital release for the Mobile Suit Gundam the Witch from Mercury opening theme song, “The Blessing”. The artwork beautifully captures the XVX-016 Gundam Aerial reclaimed by nature and protagonist Suletta Mercury, with her young alter ego Ericht Samaya. The song will be released digitally on October 1, a day before the start of the series.

Earlier in the month, it was announced Japanese superduo YOASOBI would be performing the opening theme song for the fast-approaching Mobile Suit Gundam the Witch from Mercury TV anime, titled “Shukufuku” or “The Blessing”. The tune was featured in the second trailer for the series and would be accompanied by an original novel “Cradle Star”, authored by the series head writer Ichiro Ohkouchi. The TV size version of the tune aired on the group’s “YOASOBI All-Night Nippon” radio show on September 16 at 25:00 JST.

A limited edition CD of “The Blessing” will be released on November 9. Priced at 4,400 yen, it will include an original YOASOBI-themed Demi Trainer Gundam model kit, YOASOBI-themed marking stickers for the HG Gundam Aerial, and the entire “Cradle Star” companion novel. 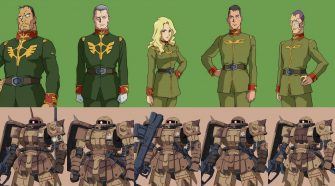