Set fourteen years after the One Year War in U.C. 0093, Char’s Counterattack serves as the final confrontation between legendary rivals Amuro Ray and Char Aznable. Char has risen to power as leader of Neo Zeon and plans an all-out assault to decimate the Earth’s population to revive the planet. Released to theaters in 1988, Char’s Counterattack adapts Yoshiyuki Tomino’s 1987 Mobile Suit Gundam High-Streamer novel, grossing 1.16 billion yen at the box office.

First in a trilogy of anime films helmed by Shukou Murase, Mobile Suit Gundam Hathaway’s Flash or Hathaway is the official sequel to Char’s Counterattack. The project was announced in November 2018 to celebrate the Gundam 40th anniversary, adapting the Yoshiyuki Tomino-penned novel series of the same name. The novels were originally released from 1989 to 1990, as a follow-up to Tomino’s Char’s Counterattack: Beltorchika’s Children novel, published by Kadokawa’s Kadokawa Sneaker Bunko imprint.

Releasing June 11, 2021 in Japan, the movie has grossed 1.8 billion yen at the box office in its sixth week, earning 1,850,500,500 yen in revenue with 910,965 tickets sold. Not only is Hathaway’s Flash the first Gundam entry to exceed one billion yen in box office revenue since Mobile Suit Gundam Char’s Counterattack, the film is nearing the overall Gundam box office record held by Mobile Suit Gundam III: Encounters in Space (1982), currently sitting at 2.3 billion yen. Both Char’s Counterattack and Hathaway’s Flash are streaming on Netflix internationally. 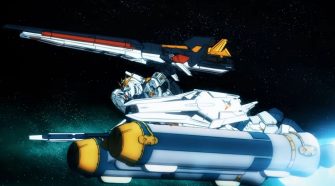