In the first act of the Hathaway’s Flash film, the main characters are traveling from the Moon to Earth on the luxury space shuttle Haunzen Flight 356, boarded by wealthy elites and high-ranking government officials within the Earth Federation.

The shuttle is subsequently hijacked by a group of masked, armed assailants claiming to be members of the Anti-Earth Federation terrorist organization Mafty. The “Pumpkin head” hijacker boldly asserts he’s Mafty Navue Erin himself, the mysterious, controversial leader of the organization, and holds the passengers for ransom. Heroine Gigi Andalucia sees through their out of character tactics and outs them as fakes, the group is then subdued by the skilled efforts of Hathaway Noa and Kenneth Sleg.

In the four months since its release on June 11 to Japanese theaters, Mobile Suit Gundam Hathaway’s Flash has become a blockbuster hit, garnering 1,088,061 attendees and grossing 2,209,628,200 yen at the box office.

First in a trilogy of anime films helmed by director Shukou Murase(Ergo Proxy, Genocidal Organ), Mobile Suit Gundam Hathaway’s Flash or Hathaway is the official sequel to the 1988 Mobile Suit Gundam Char’s Counterattack movie. The project was announced in November 2018 to celebrate the Gundam 40th anniversary, adapting the Yoshiyuki Tomino-penned novel series of the same name. The novels were originally released from 1989 to 1990, as a follow-up to Tomino’s Mobile Suit Gundam Char’s Counterattack: Beltorchika’s Children novel, published by Kadokawa’s Kadokawa Sneaker Bunko imprint.

Next Gundam Café to Shutter All Operations by March 2022 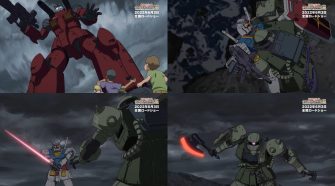