Announced in February 2020, a live action Gundam Build project was slated to be helmed by director Katsuyuki Motohiro(Psycho Pass, Ajin), a part of Bandai Spirits’s Gunpla 40th Anniversary celebration. The project went silent for a year during the COVID-19 pandemic.

Recently, Bandai Spirits has released a teaser video for the project, as well as story, characters, mechanics and staff. Titled Gundam Build Real, the project will begin streaming on Gundam’s official YouTube channel, “Gundam Channel” at 20:00 JST on March 29, 2021.

In the heyday of e-sports, “Gunpla Battle” is leading the way in popularity. By scanning their own gunpla and controlling a life-size Gundam projection, they aim to win the national championship. Hiro is the pilot, Takumi is the builder, Kentaro is the programmer, Taichi is the commander, and Sota is the armorer. A variety of crises await these adolescents. Farewells from their friends and conflicts with rival teams. This is a coming-of-age ensemble drama about high school students who gradually grow up with dreams and friendship in their hearts through Gunpla battles.

Hiro Suzuki(16), portrayed by Ryutaro Yamasaki. First-year high school student. He is the pilot of Team Bright, a natural leader, but he is short-tempered and clumsy. He is loved by those around him for his honest personality.

Takumi Shimizu (16), portrayed by Toya Nojima. First year high school student. He is the builder(in charge of assembling and painting the mobile suit) of Team Bright. He started building Gunpla under the influence of his father when he was in elementary school.

Taichi Nakamaru (16): portrayed by Ginga Kikuchi. First-year high school student. C3I (in charge of communications, command and control, and intelligence) of Team Bright. He is very sociable, but is still a bit of a jerk. His parents are real estate agents. The team’s secret base is owned by his father.

Sota Matsumoto (16), portrayed by Raizo Ishikawa. First year high school student. Team Bright’s armorer(in charge of assembling and painting the mobile suit’s weapons and armor). When he was in elementary school, he created the “Armageddon,” an original custom of the RX-78-2’s Hyper Bazooka, and became a prominent figure in the Gunpla battle world. Thanks to his customizing techniques, the “Armageddon” is confirmed to have more than twice the status of the standard Hyper Bazooka.

Gunpla used by Team Bright bearing the common name for the RX-78-2 Gundam. Hiro and his friends bought it with their pocket money when they were in elementary school. This is their favorite mobile suit, which they have repaired and improved every time they play a match.

Gunpla used by the powerful team “Monstrous”. The Zaku dedicated to Amuro’s rival Char from Mobile Suit Gundam, it is three times faster than a mass-produced Zaku. 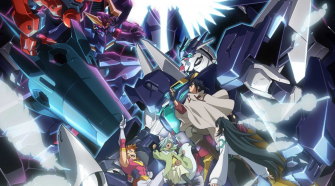