“Side Stories” are short episodes that depict new stories about the characters that appeared in the Mobile Suit Gundam: Iron-Blooded Orphans TV series. They will be presenting the hidden daily lives of Tekkadan, as well as behind-the-scenes stories that have yet to be shown.

The official account also made the announcement that the app would be delayed from its initial spring 2022 release to sometime in 2022. The notice cited the game is still being developed to make the experience even more immersive.

Revealed in 2019, Iron-Blooded Orphans G is a new smartphone app where fans can re-experience seasons one and two of the TV series through gameplay and anime components, as well as a new spin off story, Mobile Suit Gundam: Iron-Blooded Orphans- Urdr-Hunt. The mobile game is described as an RPG, will be free to download with some in-app purchases, and will be available in the App Store and Google Play.

A special edition of Mobile Suit Gundam: Iron-Blooded Orphans was announced during the 2nd Gundam Conference in September 2021 to coincide with the release of Iron-Blooded Orphans G. The special edition totaled nine episodes and was described as a “digest” version of the series, that premiered on the MBS, Tokyo MX, and BS11 Japanese TV stations in April 5, 2022, along with parts of Urdr-Hunt featured in the broadcast. 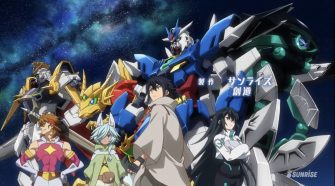