A newly sculpted Butterfly Buster B is also included, its two forms can be recreated by replacing parts: gun mode and sword mode. Many other armaments such as the Kujaku, will be included allowing for a variety of action poses.

The model uses the molding of the previously released HGUC 1/144 Dictus(Callisto’s Light Use) to create its unique asymmetric shape. Its white and deep purple body was made using color molds and a gloss injection for its glossy surface. The model kit is capable of transforming into its “Hand” Mobile Armor form.

The model kit will include clear, yellow and green beam effect parts, and a Beam Ax as accessories. 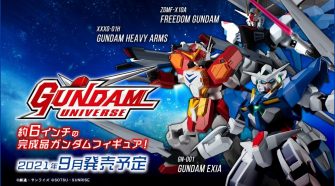