Mobile Suit Gundam Iron-Blooded Orphans: Urðr-Hunt is set in the year P.D. 323. Gjallarhorn’s political interference in Arbrau escalated into an armed conflict and came to an end thanks to Tekkadan. News of Tekkadan’s exploits has also reached the ears of Wistario Afam, a young man born and raised at the Radonitsa Colony near Venus. Venus, which lost to Mars in the initial contest for colony development, is a remote planet in which the four economic blocs have little interest. It is now used as a penal colony for criminals, whose inhabitants don’t even have IDs. Wistario, who hopes to change the status quo of his homeland, encounters a girl who claims to be the guide to the “Urðr-Hunt”.

Director Tatsuyuki Nagai and composer Masaru Yokoyama are returning to their roles for the spin-off game, with Rascal Does Not Dream of Bunny Girl Senpai’s Hajime Kamoshida for series composition. The cast for the game has yet to be announced.

Next Gundam Build Divers “THE BEST” Album Releasing this December 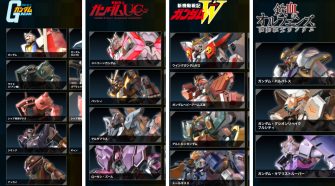