Composer Shigeaki Saegusa is receiving one of the highest honors in Japan. Sponsored by the Japanese government, the Order of Culture honors select people who have made outstanding cultural contributions.

“I never thought that I would be selected as a Person of Cultural Merit, so I am truly happy, surprised and humbled by this selection.

I remember as if it were yesterday that I put a lot of effort into ‘writing a good song’ without knowing either the right or the left sides of anime music at the time.

Even now, 35 years later, when I listen to the voices of the fans who tell me they like the music, I am encouraged that I was not wrong.

Gundam was a pioneering work that depicted ‘war and peace’ and ‘human beings’ through the medium of animation, and I am proud to have been involved in it.

With the passion of Director Tomino and his staff for trying to depict the reality of this world where justice cannot be called justice and evil cannot be judged as evil, and with the voices of the fans in mind, I will continue to do my best work. Thank you very much.”

With the AEUG in tatters from the events of Zeta Gundam, through desperation, Gundam ZZ follows a ragtag team of young scavengers that are charged with becoming new crew members of the AEUG flagship the Argama, as the antagonistic Haman Karn and Axis Zeon make their move.

Set in UC 0093, Char’s Counterattack serves as the final confrontation between legendary rivals Amuro Ray and Char Aznable. Char has risen to power as leader of Neo Zeon and plans an all-out assault to decimate the Earth’s population to revive the planet. 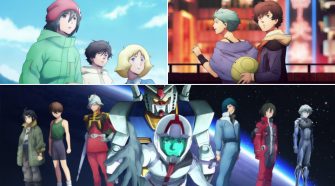