The official Sunrise Gundam information and news portal website Gundam Info recently opened a poll asking netizens which Gundam topic in 2020 they found the most impressive. The poll had 999 votes with Gundam Build Divers Re:RISE 2nd Season narrowly topping the poll with 34.4% against Gundam Factory Yokohama’s 34.1%.

The series serves as a sequel to the 2018 Gundam Build Divers following a new group of GBN(Gunpla Battle Nexus Online) players(or divers) haphazardly forming a party and taking up the mantle of “BUILD DiVERS” to participate in what’s assumed as another “story mission” game event on the distant planet of “Eldora”, inhabited by a race of dog-like humanoids.

While not quite the level of seriousness present in mainline Gundam entries, be it Universal Century works or Another Century series like Mobile Suit Gundam 00, Gundam Build Divers Re:RISE was quite the refreshing departure from what is usually offered from the Gunpla centric Gundam Build series with its own set of high stakes. Re:RISE feels like an intentional tonal shift from the fluffy, yet charming Gundam Build Divers. Divers spent the majority of the series exploring the fun of GBN, whereas Re:RISE acts as a complementary juxtaposition expounding on the Divers concept. 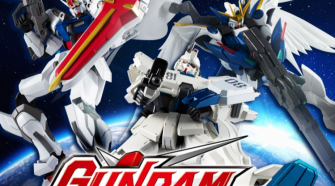